Column: A cancer survivor, he joined a coronavirus vaccine trial. He was part

Three months ago, Dan Stepenosky, a colon cancer survivor, volunteered to help test a vaccine being developed to stop the coronavirus’ spread. Last month, his teenage daughter Kearston joined him in the trial.

For the 52-year-old lifelong educator, a few weeks of aches and pains was a small price to pay to be part of the vanguard leading the way to combat COVID-19.

Today, the Calabasas father and daughter are savoring the news that the vaccine they received — developed by Pfizer and tested locally through Kaiser —has been 90% effective in protecting people from transmission of the virus in global trials. It may be in production by year’s end.

Dan Stepenosky is given a swab test to detect COVID-19 by phlebotomist Rita Moisson in Calabasas.840×575 78.8 KB

Dan Stepenosky said he agreed to join the vaccine trial despite being a cancer survivor because “I believe in science.”

“I guess we made the right bet,” Stepenosky said, as the news broke. “I hated sitting here through all of April, May and June, watching the news and feeling like there must be something I could do.”

He heard about the trial from a doctor friend last summer.

“I applied but figured they would reject me, that cancer would eliminate me,” he said. But he made it through the application process and got the first of his two-shot regimen on Aug. 31. It was a double-blind study, so he has no idea whether his vaccine was real or a placebo.

The process itself isn’t particularly difficult.

“They give you a shot, watch you for a half-hour,” then send you home with an app to check in weekly and report any symptoms, Stepenosky said. “If you develop symptoms they have a self-swabbing kit that they send UPS right out to pick up.”

There are six office visits for bloodwork to check whether the participant is building up antigens. He’s got three more visits to go.

Beyond that, participants are encouraged to live their lives normally, he said.

“They don’t want someone who’s going to stay home and be isolated,” he said. “It won’t be any good if you don’t get out, if you quarantine yourself.”

Stepenosky was a little reluctant to tell friends and co-workers that he’d agreed to test the vaccine.

“I didn’t want to freak anybody out,” he said. He got a little pushback, even from his brother, a radiologist. “He said, ‘Why are you doing this? What’s your deal?’”

Some people thought he shouldn’t be taking an unnecessary risk.

“Some people are like, ‘That’s so awesome, I’m amazed.’ And some people say, ‘You’re an idiot.’” But Stepenosky is a former high school physics teacher who isn’t swayed by others’ opinions on the coronavirus. “I believe in science and I believe in medicine, so I’m all in.”

He was actually hoping for side effects when the vaccine kicked in.

“I didn’t want the placebo,” he said.

But when his muscles began to ache a few days later, the pain was so mild “I didn’t know if that’s just from being 52, or if I was thinking about it too much,” he said. The aches ebbed and flowed, “and for three straight weeks, I wondered, is [the vaccine] doing this, or is my body just playing tricks?”

Kearston Stepenosky said of her vaccine trial experience: “Being able to play the guinea pig for such important science was super-motivating for me.”

He weathered it so calmly that his daughter, 16-year-old Kearston, wanted to take the leap as well.

She’s a Calabasas High junior, honor student and captain of the basketball team, who’s determined “to do whatever I could to be that one little tiny statistic that helps us get back to school and get back to basketball.”

Her father wasn’t initially on board. “He worried,” she said, “that I might wind up missing too much school.”

But her mother, Sharon, talked with doctors, and encouraged Kearston to follow through.

“There’s a certain amount of trust I had in the organizations — in Kaiser and Pfizer,” Sharon Stepenosky said. “Someone’s got to do it, if we’re going to move the process forward. I think it’s great, it’s courageous. So when the vaccine is available, maybe people won’t fear it.”

For her daughter, the fallout from the vaccine shot turned out to be rather humbling. “I kind of went into it with the mentality that it might be fun,” Kearston admitted ruefully. “I was clearly a bit naïve.”

She wound up sick and exhausted for days, with headaches, chills and body aches. “I wasn’t scared,” she insisted. “It was inconvenient, more than anything.”

Still, for a young woman aiming for a medical career, the experience was well worth the pain.

“It was great to see the trial close up, with its challenges and problems and how thorough everything was,” she said. “Being able to play the guinea pig for such important science was super-motivating for me.”

And among her peers, she’s unexpectedly become a bit of a role model. “Most of my friends, they were a little shocked when I told them what I planned to do,” she said. They couldn’t believe her parents would let her. It sounded so scary, they said.

“They were pretty freaked out… but when I explained why I wanted to, they were really supportive,” she said. “Some kids even reached out to me. They think it’s really important, and they want to do it too.”

When I first heard from Stepenosky two weeks ago, I admired his ardor but considered his confidence a bit cavalier. Hadn’t his bout with cancer been enough? Why risk his health again for something that’s not only unproven but shrouded in suspicion?

Despite the scientific consensus that a vaccine is the only way to unshackle us from online learning, face coverings, shuttered businesses and social distancing, only about half of Americans say they intend to get immunized once a vaccine is approved. That’s down from more than 70% on surveys in May.

And that means the problem is people like me, who don’t always trust Big Pharma and don’t believe that medical advances will be parceled out equitably.

Almost three-quarters of the skeptics surveyed tie their reluctance to concerns about side effects and questions about how effective a vaccine might actually be. Others don’t trust the process, given the way the virus has been politicized. They worry a vaccine might be rushed to the market to make a political splash.

For some, that’s a reason to rule out participating in trials. But it’s also what helped persuade Stepenosky to take a chance.

“A big part of this is that there’s not a lot of confidence because of the president,” he said. “When the politicians lose the people’s trust, we’re in trouble. We have to test these vaccines. We can’t wait.”

But he also has a practical reason for becoming a test pioneer. Stepenosky is superintendent of the 11,500-student Las Virgenes Unified School District, on the southwestern edge of the San Fernando Valley. On Monday, his district became the first in Los Angeles County to allow primary-grade students to begin trickling back to scrubbed and sanitized classrooms. Building on that progress is going to require protective measures like vaccines.

“We’ve got to build up confidence in the trials and let everyone know that the people testing these vaccines are doing fine,” Stepenosky said.

There are dozens of similar trials, in various stages, going on around the world. And while the preliminary results of the Pfizer trial suggest it’s headed for success, the trial won’t end until researchers have been able to measure the vaccine’s long-term effects, Stepenosky said.

“I think they’re going to stay at it. I don’t think it’s one horse crossing the finish line, and they win and everyone else goes away.”

This is a battle that, like it or not, we are all going to be a part of for who knows how long. And we ought to be grateful not only for the ranks of essential workers but for those ordinary folks who are willing to be poked and prodded, and assume the risks therein, so that we can ultimately venture out unmasked again. 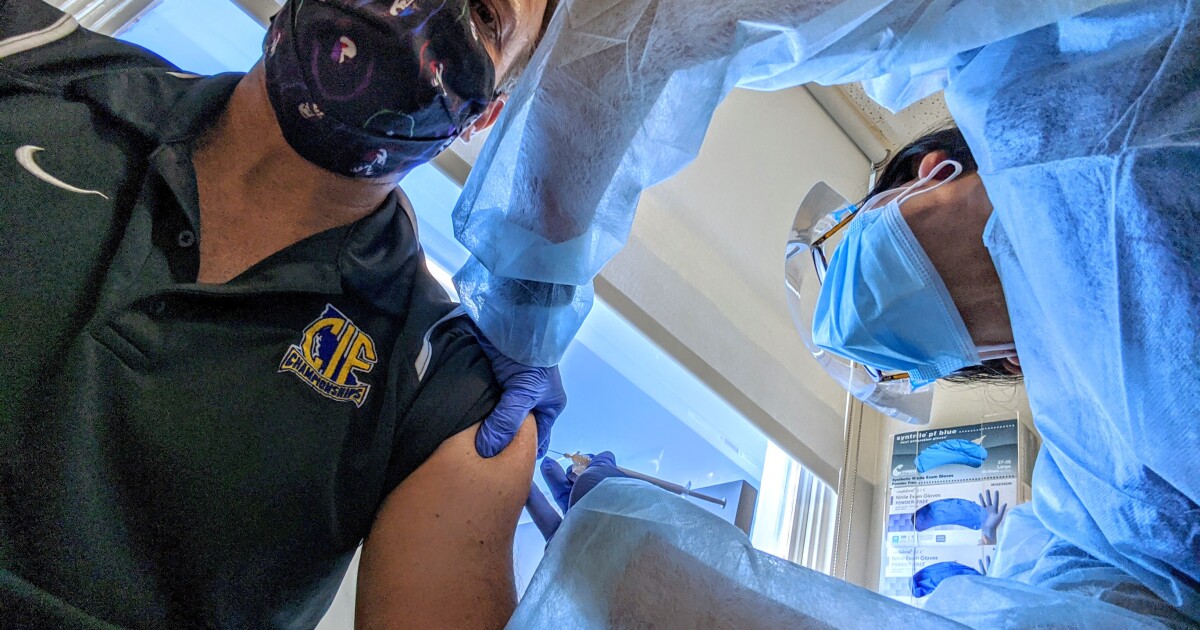 Column: A cancer survivor, he joined a coronavirus vaccine trial. He was part...

Father and daughter partook in a vaccine trial at Kaiser hospital. On Monday, Pfizer announced its success